We have done it, Spencer and I competed in, completed, and did well in the Castle Triathlon Series at Cholmondeley this weekend. Personally I am extremely proud of Spencer and myself and we are itching to do it all again.

As always we made a weekend of it, taking the van all the way to Nantwich, but even though we were only 20 miles from home the opportunity to relax and unwind is essential – also the Friday night curry was excellent!!

Saturday afternoon came and it was time to go to the venue to pre-register, a great idea to take the stress out of the morning of the event, nerves would be aplenty without having to queue to register. It also gave us a chance to visualize the venue, swim and transition – a little bit of familiarity goes along way.

The morning of the event dawned bright and sunny, but we knew the forecast was not great for later, we did not let Spence know as he was nervous enough. I did not feel to bad, nerves are a good thing if you can control them and harness them, the only downside is that with me they reduce my appetite. Having forced a porridge pot down all I could really then do was sip my sports drink to pre-hydrate. With me once we get to the venue my nerves go, its as though once I am there there is no backing out, I probably  go quiet and focused and don’t help Christina much with the kids, but if that is the case she never says.

Bike racked it was off to the swim start, my favorite leg. Love the swims and loved watching the Olympic doing the Australian Exit – run between laps. Next year!!! After a very informative, thorough, and reassuring briefing we were off into the water, over the floating pontoon and into the warm, shallow but murky water. With a great atmosphere between competitors and spectators we were off, I was leading for 400m and then a chap took me just before the turn and that is how it stayed, out of the water in second place and a slow jog to transition, not wanting to cramp. Great to hear the family shouting at this point – always a good motivation. 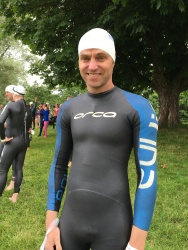 Onto the bike, tw0 laps of a 22km loop, now they did not mention hills on the entry form and yet again it was good to see that I was more than competitive on the bike with very few passing me and me actually passing people. Always room for improvement though, but considering it was only my third time on the TT bike I was feeling quite comfortable on it towards the end. Again good to see that the uphills are my strong point, just need to adjust training to keep the power down for the whole time, intervals is the way forward. The loop back through the Castle was fantastic, 35mph plus on smooth tarmac on the tri bars – good job Christina did not see that bit!!! An average speed of 18.4 with 1,200 foot of climbing….

The final leg was always going to be the toughest for me, and so it proved. Going from bike to run is hard, the legs do not know if they are coming or going, also it went very warm and close during my run, not ideal. Again they had chucked in some inclines, multi terrain and for me two laps of 4km. 1 km in Ed breezed passed me at the start of his half marathon, me I was wishing the next 7km would just go!!! Water stops, stretch stop and water the daisy’s stop & I still managed to match my training times for the mile – so again with more running intervals & brick sessions what is possible next time. The elation of crossing the line, kids running alongside, commentator and everyone cheering and clapping, fantastic and really gives you a lift and sense of achievement. 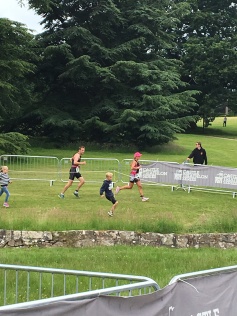 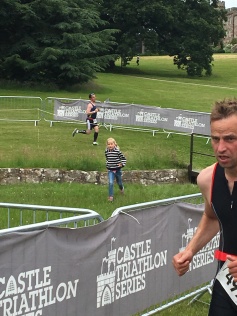 Next up it was Spencer, due to the way the ages work, even though he is only 10 he was in the 11-12 age group & he smashed it!!! It was great to see his Aunties and Nana come over to support him, especially Nana on her longest trip out since her treatment – I will be nagging for sponsorship again in September…….

We racked his bike and then watched Ed get his prize and then we were off to the swim start. Again a fantastic briefing, putting all the kids at ease, cheering & shouting from the parents and into the water they went. Spencer went off like a train, drafting a lad and was well up by the halfway point. He then went off on a bit on an angle, but still did a phenomenal swim coming out of the water in 30th out of 81 starters. At this point I am sure I got some dust in my eye as it started watering, oh but it was raining so no dust!!!

I could not keep up with him as he ran to transition, he whipped off his wetsuit & if dad had sorted his number belt out better he would have been off!! Belt sorted he flew off on his bike – he was 18th quickest from all in his age group. Christina took over and sorted his belt in transition, mums are the best!! 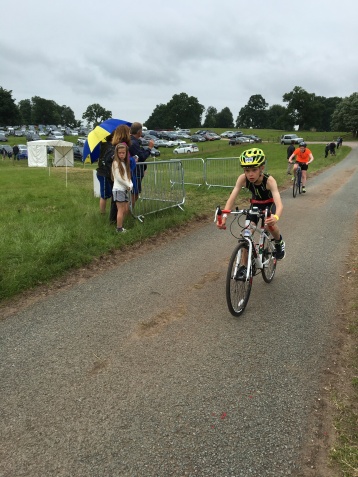 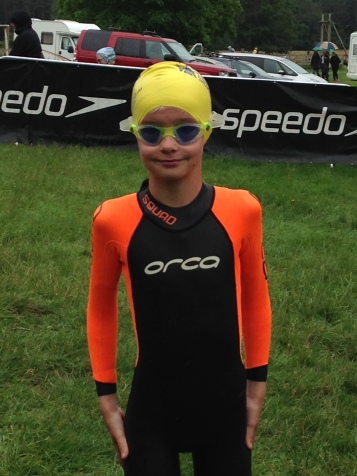 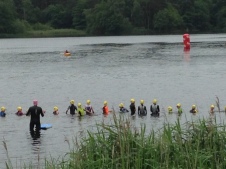 Off he went running round his 2k course and all too soon he was at the finish, two very proud parents and assembled relatives and he was smothered in hugs and kisses – much to his delight!!!

33rd out of 81 starters, 23rd male and still not 11! Fantastic effort from the little man, he now wants to take his bike to the pool to practice his transitions…..